From what I've seen, Garageband plays loops and wav files, but isn't necessarily a sample-triggering type drum machine thing. Fruity Loops is much more of a sampler/sequencer thing, so it's no large feat to great drum loops with their interface. Best is to record percussionists performing! Otherwise, it is virtually 2018, so samples. Get the orchestral pack and see if that works for your needs. GarageBand's Linn drum machine is an absolute peach, and as usual, everything else on it is extremely useable and it's virtually impossible to get a poor sound. Add to this the alchemy synth and totally playable guitar fretboards and things can come together quite quickly. Quickly create drum grooves with the Smart Drums in GarageBand for iPad by moving drums parts in a grid to set the complexity and intensity.

After seeing one of THE best live bands (RUSH!) this week with one of THE world's best rock drummers (Neil Peart), it's only fitting to be inspired and do a tutorial on recording drums with Garage Ban 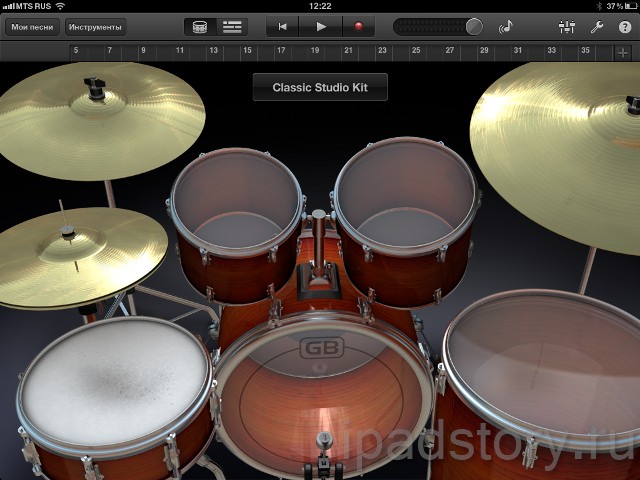 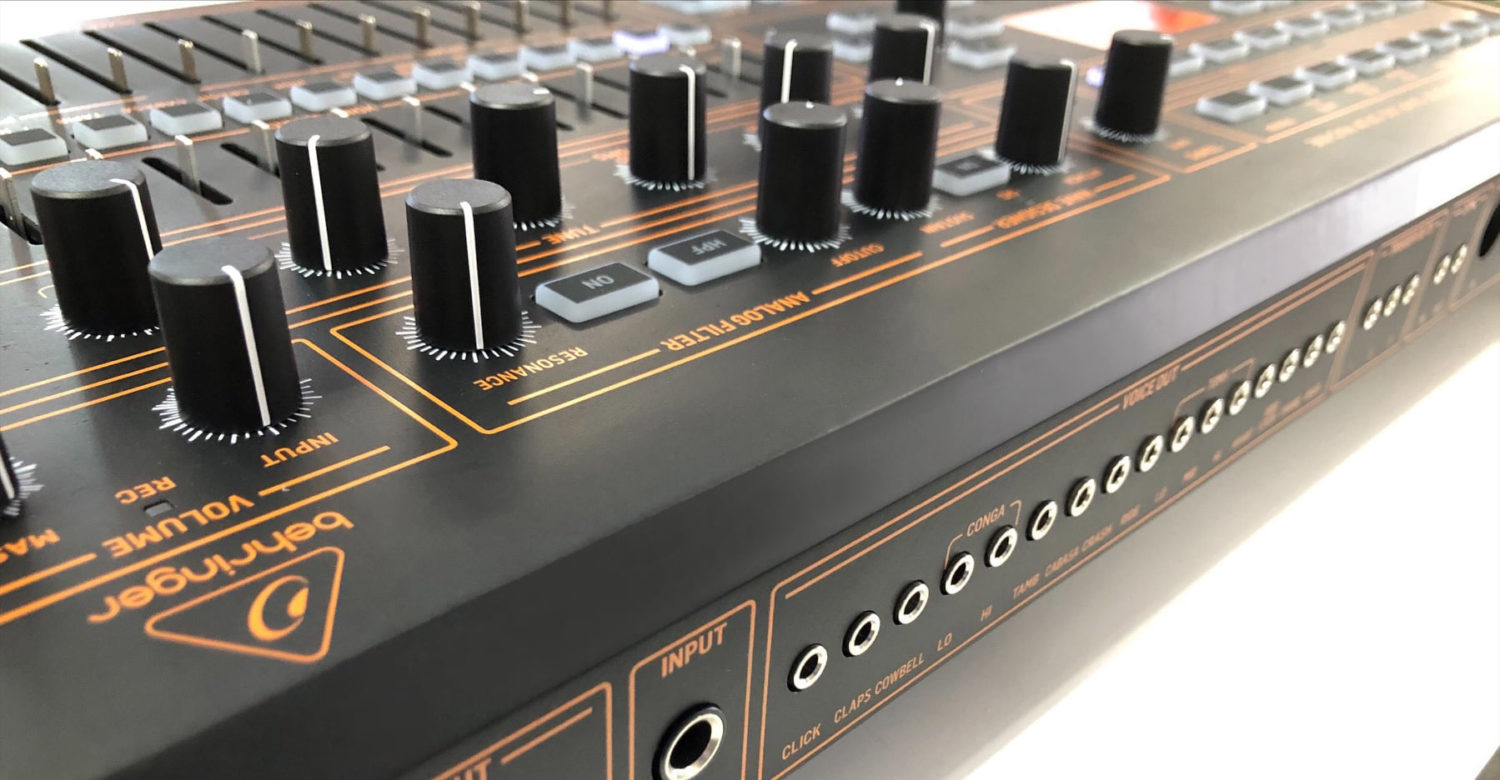 After seeing one of THE best live bands (RUSH!) this week with one of THE world's best rock drummers (Neil Peart), it's only fitting to be inspired and do a tutorial on recording drums with Garage Band for iPad. If you're lucky enough to have a seat close to the stage, it's quite an experience to see the 'Professor' up close and actually hear his drum sound coming from the stage. So on with the tutorial... and a mean mean stride...

Let's look at the setup and equipment needed and the different options - Acoustic and electric - we have...

Acoustic Kit (Never Turn Your Back On a Monster!)

Stereo is crucial if you want to get a fat sound. IK Multimedia has released the cool iRig microphone but it's mono and you can't combine 2 of them on the iPad. Now, this being said, perhaps you're going for a mono drum sound like the Beatles.

2. Griffin iMic or the upcoming Alesis iO Dock with a multichannel mixer and your own mic collection.

If a stereo mic isn't enough and you want more mics and control, then simple run the mics to a mixer and attach it's stereo outputs to the inputs of the iMic or Alesis I/O. For example, you may want a Kick/Snare/stereo overheads setup. The only caveat in this setup is that you will need to not only balance your volume levels between the mics but also pan and EQ them to the sound you want BEFORE you record. GB does not allow volume, pan or EQ separation of each mic after the recording is done as it's a stereo file. Here's hoping Ver. 2 has at least EQ. The other issue I came across was the headphone output of the iMic is low especially when playing the drums. You can either get a headphone amp or plug in the outputs of the iMic to your mixer and setup an aux monitor section. Be careful though to properly assign this headphone mix as you don't want to end up recording the metronome click and music tracks to your drum track.

As mentioned in a previous article, in order to get MIDI control for the iPad, you will need the Camera Connection Kit and a USB MIDI interface.

You will need a powered USB hub to use the Korg NanoPad. Also, if you need to assign different MIDI note mappings to the pads, this will have to be done in Korg's editing software on your Mac.

V-Drums
For even more drum like control, you can plug in a set of V-Drums into the iPad. The V-Drums doesn't have a USB out but you can use a MIDI to USB converter, like the M-Audio UNO into the Camera Connection Kit. A Google search will show many MIDI USB devices compatible with the iPad.

Recording Control (We Have Assumed Control...)

Mic positioning ('Roll the Bones'): 3-4 mics and it captures the kit superbly with a nice room sound. If you're not sure of what his technique is, just do a Google search for 'Glynn Johns'. When using just a stereo mic, experimentation is key with the distance from the drums, in line with the kick or snare, placing it as an overhead, etc.

Room selection/dampening/drum tuning ('Workin' Them Angels'): Without a doubt, one of the key things to recording a great drum sound is TUNING! Wait... you can tune drums?I've lost count as to the amount of recordings I've heard from bands recording themselves on a budget with poorly tuned drums. When properly done, even cheap drums can sound great and if you're not sure on how to tune, check out this tutorial on Recording Drums.

The room you place your drums in will also be key to it's tone. Try to find a room with high ceilings, wood panel walls, or soft furniture to absorb and disperse the sound. Drums are LOUD and in a small, low ceiling room will cause all sorts of problems. Empty rooms with dampening can also cause standing wave problems. Perhaps ask friends with appropriate rooms or even small churches if you can spend some time recording. Lastly, get moving blankets or office dividers if the room is close but not quite perfect in sound to help alleviate problems such as slap back or an overly loud kick drum.

Recording then looping sections (Subdivisions). In a previous tutorial, I explained how GB does things in 'Song Sections' where you can specify how many bars each section is. Here's a trick though for drummers that's useful especially with demo's of songs or for experimentation of new ideas. With this method, it's likely the drummer won't be playing with any backing tracks on the iPad other then a click since he's going to repeat sections of the song, so perhaps set up someone playing the bass/guitar parts, etc. in his monitors. Otherwise, lay down a ghost track and copy/paste it numerous times for different drum takes. Set your 'Song Section' to 'Automatic' so that it will record an infinite number of bars.

The drummer then plays along to the click/ghost track and records various takes of the song or parts of the song. Here's an example. Verse 1 may be recorded three times with the same groove but perhaps a different fill on the end or with/without ghost notes on the snare. Now you can edit the track using the split tool and break apart the takes into various parts such as drum groove/groove with ghost notes/groove with ride/drum fill 1/drum fill 2/etc. Duplicate the track by tapping on the track icon and hitting 'duplicate'. A second track will appear but it will be empty. We have two options to get parts pieced on the duplicated track. You can 'copy' the recorded parts and 'paste' them into the duplicated track to form the song. Be sure to select the duplicate track after copying or you will be pasting over the original and move your playhead to where you want to paste the part in. OR... you can touch the section and drag it to the duplicated track and the bar you want. Looping is also available on these parts so you can easily repeat good takes. Once these parts are done, the original track can be deleted to free up tracks for other instruments. This method can also be applied for vocals, guitar, etc. but the trick is to have at least one track available to allow for duplication.

Using 'Smart Drums' (And the meek shall inherit the earth...)

When GB first came out for the Mac, one of the best things I loved doing was writing and recording a song then taking out the standard rock drum beat and replacing it with something totally unexpected. This allowed me to see the possibilities of different rhythmic combinations/instruments and perhaps give the song a unique flavor. One of order of Indian tabla coming up! If you're not a drummer, 'Smart Drums' with the 'Dice' feature will randomly play different drum patterns. Once you find something you like, simply move the playhead into position and hit record.
For recording drum parts on the screen, GB makes it easy by not having you play all the parts at once. You can start with just the kick drum. Rewind and add the snare. Now the hi-hat and so on. Quantization will also groove it better in most cases too. Also, the drums are 'touch sensitive' and hitting different areas of the hi-hat, snare and ride will give you various tonal aspects of their sound... very nice feature!

Recording Tips! (Closer To The Heart)

Set up drums, drummer joke, mic up drums, another drummer joke, and run if the words 'Hey Guys... I got an idea for a song!' are spoken by said drummer. As with most drum sessions, patience is a virtue. Drums are finicky and need time to be properly setup. Monitor your drum sound with speakers and headphones as each will present their own sound of the kit and problems. Don't skimp on using quality headphones either since they may make you aware of issues you wouldn't hear in regular monitors. Problems such as a squeaky kick pedal or drum stool, unwanted room slap back, badly tuned toms (tuning with headphones is quite useful too!), unwanted buzzing of an object in the room (i.e. picture frame/vase/acoustic guitar strings).

Good luck if you're recording a kit this big!!

If you're using multiple mics, check for phasing! You can't fix this in the mix since the drums will be summed to a stereo channel in GB. Your drummer also might consider spending some money on his own in-ear monitors since they will cut down on click track bleed. He also won't need the volume to be as loud since they will block out the majority of his live drum sound. Be safe on your volumes! Consider taking 2 days to track the drums... one to setup and experiment and the second to actually record. Let the drummer warm up for a while perhaps with the click of the song. Work on feel and groove with this click! Try different snare drums if you have the option. One likes to believe in the freedom of music!